Tokens vs Corona – A Blockchain Voucher System To Distribute Grants 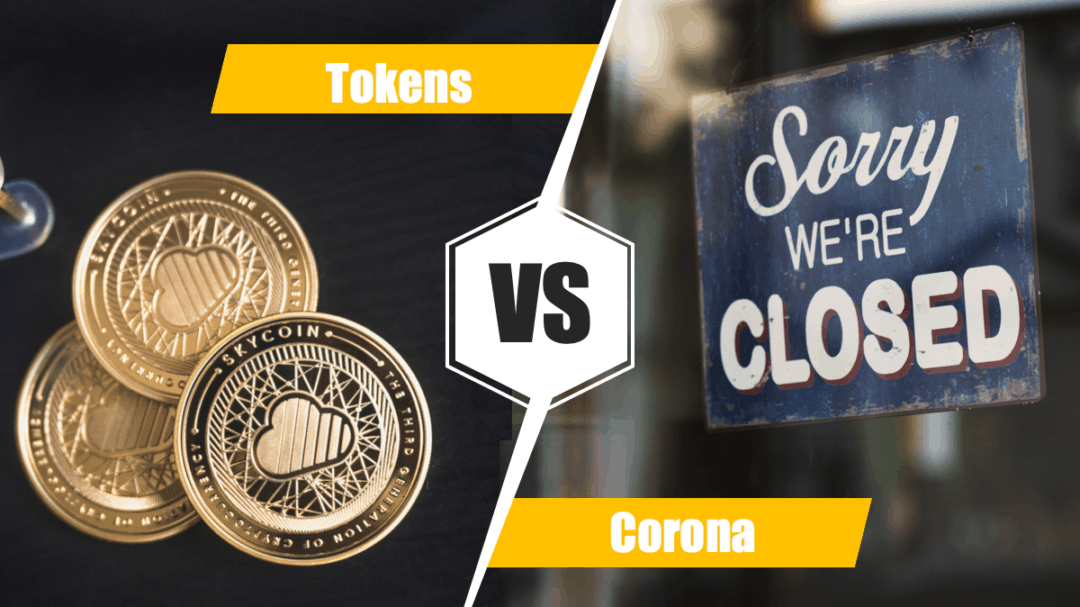 The Bavarian government is promising EUR 10 billion, the German government EUR 600 billion, and the US-American promised USD 1000 billion in financial aid as a countermeasure to fight the economic effects of the Corona crisis.  This is a huge effort and we all hope that it will soften the economic consequences of global lockdowns. However, where will all this money go? What criteria is used to distribute it? Who reviews the applications? What will be the impact of injecting vast amounts of money into the market while the effects of the pandemic are highly limiting the production of goods and services? Here’s how Blockchain technology could help: Tokens vs Corona – A blockchain voucher system to distribute grants.

As we described, a payment distribution system like WFP uses to deliver cash to over 500.000 refugees in Jordan, could also be used to distribute financial aid of governments to citizens and businesses efficiently. In this post, however, we want to take a look at an alternative that could be distributed instead of traditional national currencies, let’s call them blockchain vouchers or tokens.

Tokens vs Corona – A Blockchain Voucher System To Distribute Grants

Distributing EUR or USD directly to businesses and citizens grants beneficiaries the ability to use the funds how they want. They might spend it locally, to support local business, they might put it in their bank account and save it for better days, they might invest it into the company shares or buy stuff at Amazon. Due to a lack of traceability, it’s impossible to measure the usage nor the impact of helicopter money precisely. Tokens, however, are programmable. This characteristic allows the issuing entity to predefine limiting spending parameters. For example, the government could define that it is only possible to spend these tokens on small and medium-sized businesses, located close to the consumer and within the next three months. Therefore, programmable tokens allows to create a more precise and target-orientated tool of governmental economic development aid. 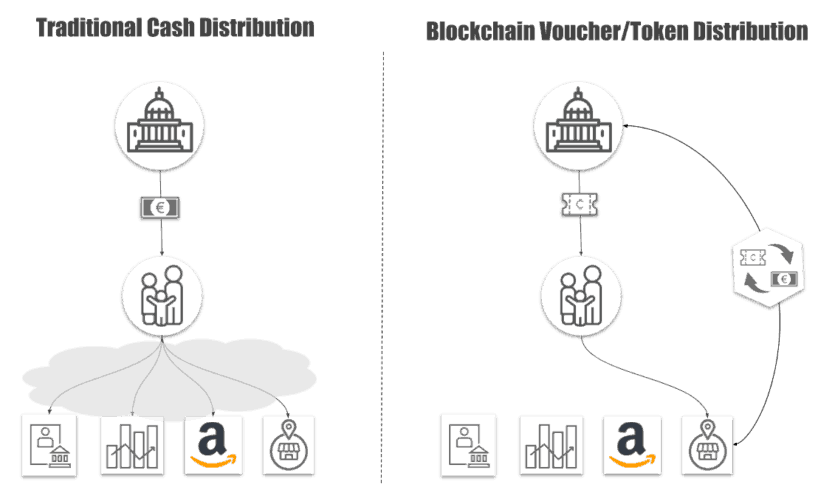 An interesting concept of implementing blockchain vouchers was proposed during the WIRVSVIRUS hackathon,  which has been organized by the German government to find innovative solutions to encounter the corona crisis. The project goes under the name dgE-Krisengeld, dgE stands for “dezentraler gemeinschaftlicher Euro” (decentral common Euro). However, informally the project is known under the term “Diggi”, a homonymous which predominantly German teenagers use as a form of address, like dude or mate.

The concept and can be summarized in three steps.

The government could distribute Diggis to citizens via a letter using their tax ID. Consumers could then scan a QR Code and set up a wallet, which allows manage their  Diggis. In the next step, citizens could spend their received Diggis at participating businesses. Therefore, the consumer could scan a QR code provided by the cashier to conduct a payment. However, since most companies cannot welcome customers at the moment, an online alternative point of sale for small businesses is required. A solution could be an opensource e-marketplace, like Openbazaar, which enables small businesses to sell their goods and future services for Diggis without paying any fees.  In the last step, businesses could then redeem their received Diggis at the fiscal authority for real Euros.

Since consumers decide at which businesses they want to spend their Diggis, governmental aid would be automatically allocated to companies, perceived as valuable by the market. Diggi tokens could be programmed in a manner, that they are only spendable at business registered close to the consumer, thus creating a local impact.

The concept of having a medium of exchange, which only can be “spend in a particular geographical locality at participating organizations,” is by no means novel nor innovative. It reflects the ancient concept of local currencies. Through limiting spending opportunities, these currencies stay and continue circulating in a particular community, which has economic benefits for this group. However, the limited spending opportunities, a lack of exchangeability, and relatively high cost related to managing these currencies are also their major drawbacks.

Luckily, Blockchain technology allows us to eliminate these weaknesses:

A concept of interconnected blockchain-based community currencies is brilliantly implemented by Will Rudick and his team at Grassroots Economics to inject liquidity into poor areas of Kenya and other African countries.

The Future of Donations

I am very proud to announce that we at Datarella are working at full speed together with two partners of the financial and the humanitarian sectors, to develop a solution to support the fight against the Coronavirus in Africa. This solution will be using tokens to add transparency to the field of donations – providing the donor with the certainty that her contribution was received by the people who need it. An official press release describing our Traceable Donations product will follow shortly. Stay tuned!