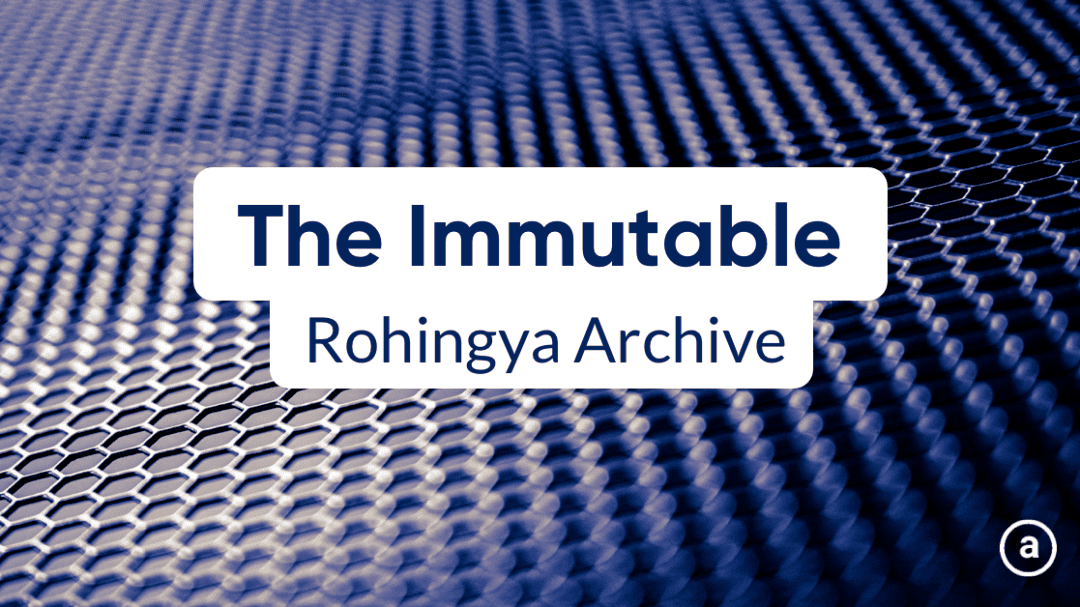 Since 1982 an extensive destruction of public records, documenting the Rohingya legacy, has taken place. The remaining documents are at high risk of getting lost and are spread among the widely distributed Rohingya population. Preserving these documents is of tremendous value since they stake historical claims to be citizens of Myanmar as well as to preserve the Rohingya heritage.

We are happy to announce that Datarella teamed up with the Rohingya Project, and researchers from UCLA and CUNY to build the Rohingya Archive (R-Archive). The R-Archive is a decentralized digital heritage archive to preserve the endangered legacy of the stateless Rohingya people. Documents will be stored permanently and securely encrypted on the decentralized storage network Arweave.

The term, Rohingya people, describes an ethical group, originated in Rakhine State, Myanmar, previously known as Burma. In 1982, Myanmar’s government decided to deny citizenship to the predominantly Islamic Rohingya minority. In 2016, the Rohingya people were forced to flee their home country to escape the genocide through Myanmar’s armed forces and police. Now, the remaining Rohingya people are dispersed mainly over Bangladesh, India, Pakistan, Thailand, Indonesia and Saudi Arabia.

The situation of Rohingya people stays problematic. Many are living in refugee camps and are not granted a legal identity by their hosting governments. Without a legal identity, many do not have access to public services, like schooling and insurance, and are not allowed to work. The absence of a legal status results in immense barriers to creating a brighter future for the Rohingya community.

If there would be just proof of their legal claims?

There are still old passports and documents distributed among members of the Rohingya community. The R-Archive is meant as a decentralized tool for preserving the Rohingya legacy.

Rohingya documents, which are uploaded to the R-Archive, will be preserved forever.

Okay, okay, let’s take this bite by bite.
A blockchain for data storage? Yes, you are right, normally you don’t store vast amounts of data on a blockchain. That’s the case because, with “normal” Blockchains, every node stores the complete chain, from the first to the latest block. This results in very high costs for storage. Storing 1 MB on Ethereum would set you back at least 5000USD in gas fees. In contrast, storing a 1 MB on Arweave will cost you only less then 0,03 USD in $AR.

How?
Blockweave data structure allows nodes of the network to only store an arbitrary size of the data set on their machine. The total weave size doubled in the last month from 10 to 20TB. If the growth continues, it is likely that individual miners only store a small fraction of the whole weave. However, Arweave’s consensus algorithm, incentivizes miners to replicate data sets as often as possible. The more data a miner stores of the weave, the higher is her chance of mining the next block and earning rewards.

To store data permanently, a fee is paid in $AR. The majority of AR transaction costs go into an endowment value, which is released over time to the miner. This, in combination with a very conservative estimation of the development of storage costs, allows permanent storage.

But let’s go back to the R-Archive and save the mind-blowing details of the Arweave technology for an R-Archive tech deep-dive blog post.

The R-Archive is a collaboration between the three partners and an MVP is built with a grant provided by the Arweave Foundation. Thank you <3.

Rohingya Project, a humanitarian organization, based in Kuala Lumpur, which is empowering refugees, leveraging innovative technologies, such as blockchain. You might know them already from our joint R-Coin project. The R-Project, led by Noor Muhammad and Saqib Sheikh, who initiated the R-Archive. Further, they provide and train field officers who are collecting Rohingya documents in Bangladesh, Saudi Arabia and Malaysia, as well as the scanning and indexing.

University researchers, Anne Gilliland from Center for Information as Evidence, UCLA and James Lowry from the Archival Technologies Lab, Queens College, City University of New York. Our academic partners created a guide for compliant data collection and a metadata standard, which allows us to index collected Rohingya documents. Further, Anne and James help us to connect to the archival and academic society.

And last but not least Datarella. We are in charge of the technical design, project management and development of the R-Archive.

The R-Archive is a pilot for using Arweave decentralized storage technology for any kind of digital archive. We are confident to prove the benefits of using decentralized technology, like increased security, distributed custody and democratization, and a wider distribution of trust to the archival society. Stay tuned for more updates and insights on the R-Archive.