October last year in London, we kicked off the Humanitarian Supply Blockchain Proof of Technology with members of Britain’s Department for International Development (DFID) and their Frontier Technology Livestreaming (FTL) programme. The technology to be “proven” in this case was blockchain, specifically within the setting of humanitarian supply chain management. Over the last months, we have developed this system, named it “Track & Trust”, and successfully tracked the first shipment from Pakistan to Dubai.

The project essentially was concluded in three phases:

In the concept phase we tried to figure out the actors and their common denominator within the humanitarian supply chain. For this we identified and interviewed the actors involved in the DFID’s supply chain. As a result, we identified four actors: Humanitarian organization (in this case DFID), the supplier (SUP), the logistics service provider (LSP) and the implementing partner (IP – who also acted as consignee). The system was to be able to track the actor accountable for the shipped goods: 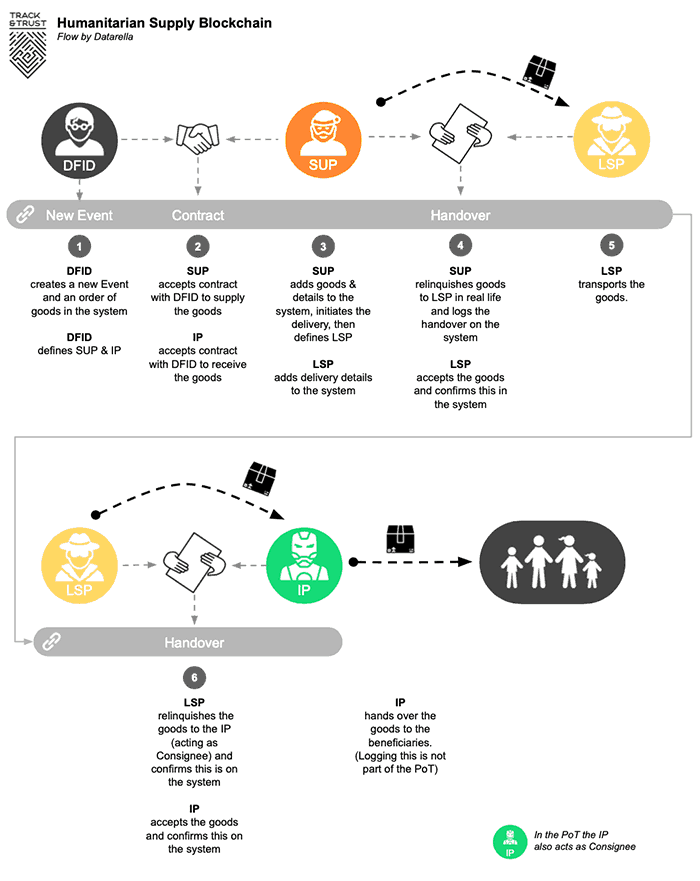 Process: Tracking accountability of a shipment.

After the development phase was completed, all we needed was: a shipment. Since the Mozambique flooding had just happened a few weeks earlier, a first potential candidate was tracking a special vehicle used for loading and unloading aircrafts freight during the event. Unfortunately the time was too short for onboarding the involved actors. So the choice fell on a far calmer event: We were to track a delivery from a supplier located in Pakistan to a warehouse in Dubai. The warehouse serves as stock and enables fast distribution to disaster areas in the region.

This last chapter took place this summer, with a DFID-scheduled shipment of goods. An amount of 304 DFID family tents were to be sent to the warehouse. The logistics organization was done by the domain experts and officers at DFID, who also had managed to source the parties involved. Before the shipment took place, the actors had to be onboarded to the system. For this we created user manuals and scheduled screencasts (varying from 20 to 60 minutes) for each participating party where questions could be clarified.

As expected, the most difficult part for the users was the ones where interaction with blockchain was required. In our case, that meant uploading a key-file and entering the password to unlock the key-file into the user interface. We received most questions on this aspect during the demos, and in the follow-up survey this was the source of the most uncertainty with respect to the usability.

The actual shipment started with us learning about something we could improve, which was the whole purpose of the testing phase! Luckily it was a rather minor detail, namely that goods to be shipped need to be inspected before they can be marked as ready for pick-up. The implementation of this was nothing more than adding an option in a drop-down menu, but the time the goods were waiting to be inspected was significant. As the goods were handed over from the supplier to the logistics service provider we received our first question on how to use the key-file. However, even before we could respond to the email, they figured it out themselves, so no intervention was necessary.

From there on the shipment flowed like expected, the last handover was frictionless and all goods arrived safely. But since one of the goals was that we learn as much as possible and try to get our partners to share as much of their insider knowledge about the supply chain as possible, we decided to issue a survey to them. There we collected impressions and scores on usability, perception of blockchain in the system and general feedback. All of the partners responded to the survey, including the logistics officer from DFID. All of the respondents found the briefing beforehand to have been relevant, sufficient, clear and precise. Although, one could say we should have put more focus on the key-file and it’s importance.

The usability overall was rated highly with an average score of 4.2/5. Potential improvements noted as comments were mainly about added information points such as ETA and increased visibility. Additionally, the relatively high security was perceived by one respondent as confusing. However, not a single party found that any necessary functionality was missing, which meant that we’d set the level of prototype-abstraction correctly.

According to the survey, it was clear to all actors how the blockchain improved accountability across the supply chain, which meant that we’d achieved one of our goals: to have blockchain only where needed and empower the user.

As a technical partner, creating Track & Trust has been a great experience and learning process – applying the blockchain to an important pain point of the humanitarian supply chain. Working with the participants in this project has been delightful – everyone was extremely helpful in discussions (on- and offline) as well as workshops.

For Track & Trust, the ending of this phase is the beginning of a new one: Tracking the last mile in the humanitarian supply chain has been described by leading humanitarian organizations as the most murky. Therefor we decided to tackle this next pain point as we applied for a grant by the European Space Agency. We are continuing the development of Track & Trust and taking it to the next level – literally.