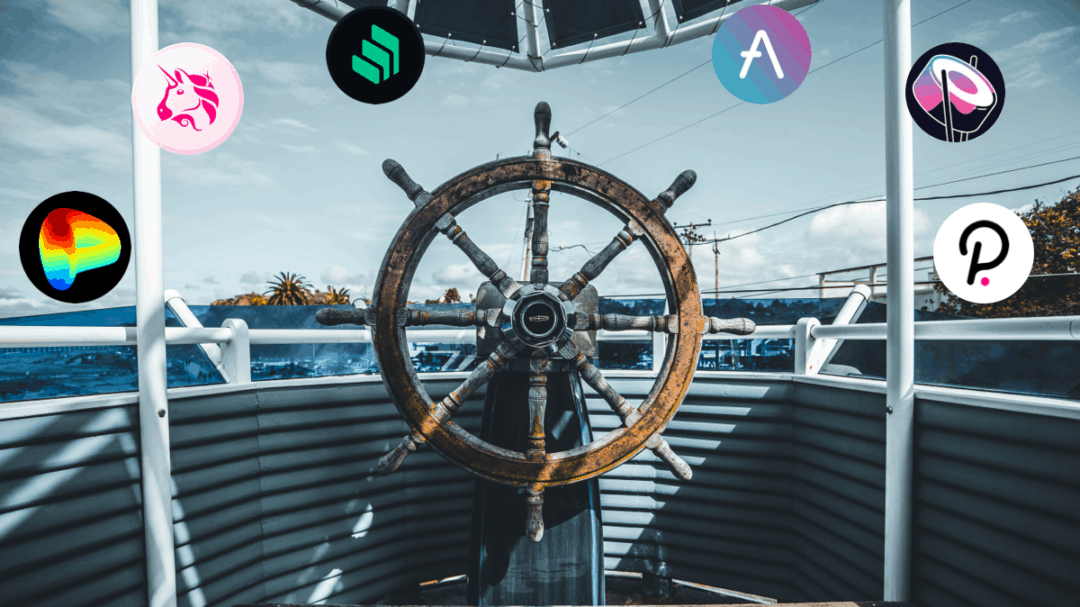 Money is not Power – Control Over it Is.

Uniswap, a Decentralized Exchange (DEX), generates every 24h around $3.5m in fees for liquidity providers of the protocol. A recent proposal suggests, taking 0.005% of the 0.03% fee to distribute it to the Uniswap DAO, to fund further development of the protocol. If implemented, holders of UNI, Uniswap’s governance token, are going to have control over these funding streams, $600k a day, $219m a year. Continue reading, to learn more about DAO governance tools, the use cases of governance tokens and the major DAO infrastructure providers.

What is Governance, and why do we need it?

Your friends and you need to make a decision to which bar to go (at least before corona). Multinational companies need to decide whether to put BTC on their balance sheet or not. And the United Nations need to reach agreement how to reduce CO2 emissions. Different types of organized groups require and use different governance tools to come to a collective decisions. Governance includes processes, like discussions and voting, tools, like laws and contracts, and structures, like democracies or hierarchies. While your friend and family language and informal hierarchies are sufficient to reach agreements, nation states require laws and formal voting processes. With the Bitcoin Network a new type of self-organized society arose, which don’t have a centralized entity responsible for decision-making. These novel types of organizations bring up their own governance primitives, which allows them governing and maintaining their underlying computer protocols.

DAOs started with Bitcoin and developed since then. Today, we see different types of DAOs in the blockchain space. From people to come together to govern a layer one protocol, to Decentralized Application (dApp), to tokenized investment funds. In general, DAOs are stateless, open and not controlled by any single entity. The centre of DAOs are smart contract which control the funds of the organization. When it comes to DAO governance, you can differentiate between two main types, Off-Chain and On-Chain governance.

Bitcoin and Ethereum use an informal governance process. Proposals are made mainly by core developers and discussed in the community. When they reach consensus, miners, the entities which run the machines of the protocol, update the software of their nodes and thereby the underlying protocol. This process can be very time costly and can lead to hard forks if only a part of the network decides implementing the changes. A prominent example is the hard fork of Ethereum and Ethereum Classic, as a result of “The DAO” hack, or Bitcoin and Bitcoin Cash, which implemented a bigger block size.

As the name indicates, the voting process of on-chain governance takes place on the blockchain, using some form of governance tokens.
Hereby, three different types are common.

1. Company Model
One governance token represents one vote. These tokens can be transferred and traded on open market.
2. Membership Model
Each member of an organization gets assigned only one vote via a membership token. These tokens are non-transferable and in most cases even revocable.
3. Reputation model
This system can be seen as a mix of the company and membership model. One reputation token represents one vote, like a company token. However, reputation tokens are not  transferable, like membership tokens.

Governance tokens find application in modern layer 1 blockchain protocols, like Tezos, Cosmos and Polkadot. Further, blockchains built using the Pariy’s Substrate Framework facilitate on-chain voting. On-chain voting brings various advantages for layer 1 protocols since it significantly reduce the possibility of hard-forks and allow for faster turnaround time to implement changes. Further, governance tokens are extremely popular for Dapps, especially in decentralized finance (DeFi). One of the earliest examples is MKR, the governance token of the Maker DAO, which allows holders to vote on decisions on the protocol the stable coin DAI runs on. Today, most of the DeFi protocol have their governance tokens like COMP or AAVE, of the lending platforms Compound and Aave, or Automated Market Makers, Balancer (BAL) and Uniswap (UNI).
Governance tokens do not only find a utility in allowing voting rights on proposals. They prove as a very effective marketing tool to attract users to actively use DeFi protocol. A great example is, how Sushiswap, a Uniswap clone, attracted over $1b of liquidity by introducing their $SUSHI governance token as a reward for users providing liquidity. Much of this liquidity came from Uniswap and went back to Uniswap after their launch of their own governance token $UNI. 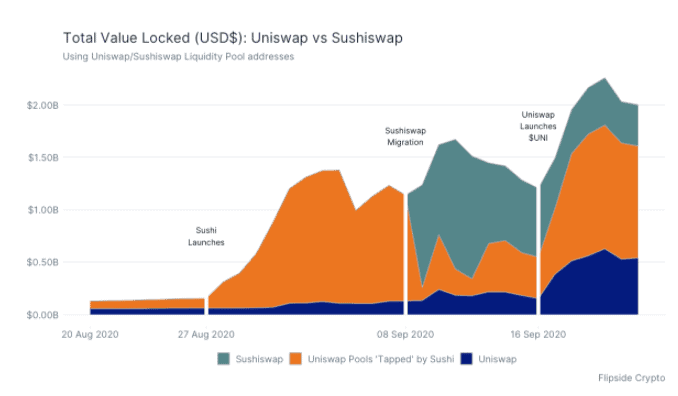 But how does voting and governance now work in detail? Most DAOs are made of three layers. The first layer are often web2 primitives to discuss proposals, like forums and communication tools, like Discord or Slack. The second layer contains a voting mechanism, involving governance tokens. The third layer involves the fund management of the DAO.

Let’s have a look at major DAO infrastructure providers, which evolved in the space.
Aragon DAO & Snapshot, Moloch DAO, DAOStack and Community.xyz.

Aragon DAO is by far the most developed DAO infrastructure project. It hosts over 1700 DAOs which have around $900m crypto assets under management. Aragon offers a wide range of apps, for managing funds, projects, DAO specific governance tokens, permissions and voting. The sky’s the limit with Aragon. Custom apps can be developed using Aragon CLI. Further, Aragon offers the Aragon Court, a human based arbitration service. Aragon itself has two tokens, ART for voting on proposals and ANJ which need to be minted with ART and staked to become an Aragon Court judge. Aragon DAOs are only currently available on the Ethereum Mainnet. Since this made voting very expensive, Balancer Labs developed Snapshot, a gas-less off-chain voting tool, which leverages IPFS and Arweave to verifiable count votes. The latest integration of Aragon Agreement allows for off-chain voting on Snapshot with on-chain execution. Further, Aragon is developing an own blockchain, using the Cosmos SDKR, to migrate the platform risk caused by building on Ethereum.

Moloch DAO is a framework, which is used, for example, by MetaCartel DAO or The LAO. Moloch DAOs also have a proposal, voting and fund management template. This DAO framework features two types of tokens, Loots and Shares. Loots are economic shares in the funding pool of the DAO, without any voting rights. In contrast, Shares inherent also voting rights. The Pokemol app provides a frontend for Moloch DAOs and on DAOhaus you can find an overview on all Moloch DAOs. On special feature of Moloch DAOs is the “Ragequit” feature, which allows users to take their funds and leave a DAO if they not agree with decisions made by the community. Moloch DAOs can be launched on Ethereum Mainnet and also on xDai, a second layer solution with substantially lower fees.

DAOstack is used, for example, by The Genisis DAO and over 50 smaller organizations.  Alchemy is the fund and proposal manager of the framework. The DAOstack introduced the GEN token to direct attention to the most relevant proposals. GEN can be bought by anyone and staked on any proposal of any DAO. However, GEN itself does not have any voting power, it is used as a signal for high quality proposals. Voting takes place using REP tokens of each DAO. When a proposal is passed, GEN stakers will be rewarded with GEN. This concept is called “Holographic Consensus”. Like a Moloch DAO, DAOstack is available on Ethereum Mainnet and the xDai network.

Community.xyz is the DAO framework of Arweave. Arweave itself is a new type of storage blockchain, which allows the creation of fully decentralized application. These dApps are governed by Profit Sharing Communities (PSCs) which can be created and managed using the Community.xyz dashboard. These DAOs leverage a super exciting token model, called Profit Sharing Tokens (PSTs). The utility of these tokens is two-fold:
1. Voting
Like other governance tokens, the PSTs can be used to vote on proposals. For example, to reward contributors with newly minted PSTs for accomplishing tasks, written out on the community.xyz job board.

2. Monetization
What makes PSTs especially interesting is, that they grant holders a share of the transaction fees (gas fees), paid by users while using the application. This model allows creators of dApps on the Arweave network to fund and continuously monetize on the usage of their applicaitons.

For the first time in history, Bitcoin granted mankind full control over their money. No centralized issuer. No single entity, which could hinder you from transferring your assets. This sovereignty is enabled by a new organizational form, often referred to as Decentralized Autonomous Organizations (DAOs). Modern DAOs come with governance tokens, which allow their holders to take part in the decision-making process of these organizations. DAOs and governance tokens form a new framework for organizing human collaboration. Most DAOs are open and operate boarderlessly. Anyone to join and to earn money for contributing to a common goal. Funds of these organizations are hold in Smart Contracts in a secure and transparent way. Currently, we are at the very beginning of this novel organization form. Time will tell how these communities will develop and integrate with existing legal frameworks.