Could we learn all about behavior change by simply applying some makeup? 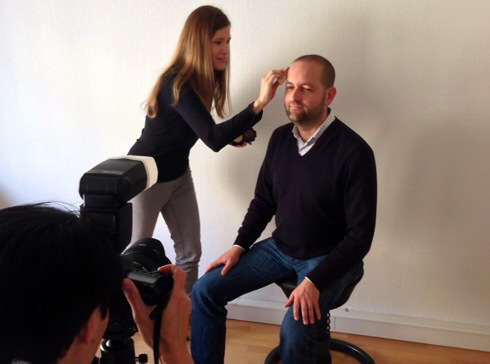 At the Quantified Self Conference 2014 in Amsterdam, I attended a breakout session with the promising title “The Future Of Behavior Change”, moderated by Lukasz Piwek, a Research Fellow in Behavioral Change at the Bristol Business School.

Our curious and engaged crowd discussed that matter extensively and – unsurprisingly – left the session with more questions than answers. But: “it’s not about the answers, it’s about find more questions. Answers are so temporary”, as Ernesto Ramirez, the Quantified Self Lab’s Program Director elegantly tweeted. As a good researcher, Lukasz himself offered some possible answers but concluded that definitely more research is needed.

Based on his studies at Bristol Business School, he thinks that these factors lead to a lack of long-term user involvement while using Quantified Self tools, which is a major condition for behavior change:

– Lack of data validity and reliability
– Oversimplification of inferences

Regarding his first point, I take the risk of completely ignoring (his) research and putting my shirt on good judgement (which I usually avoid to do): I claim that people don’t bother at all, ignore any scientific shortcomings and look for comprehensibility and usability of Quantified Self tools: as long as variances of results; e.g. number of steps taken or burned calories stay small, users will accept them and stick to these tools. As often, critics as experts or journalists, point to flaws in technology, but individual users remain unaffected. We see this behavior in many seemingly sensitive topics, such as the privacy discussion. My guess would be: ask a hundred users if they are concerned about validity or reliability of collected data, and 95 would say “no”. We will do that via our explore app and I’ll hand the results in later.

Lukasz’ second finding is a bit more challenging. I must admit that I’d prefer to base my claim on reasonable data. And yet, I don’t believe in this finding either: most people I know – during the session Carine Coulm  introduced the term ‘normal people’; and I refer to exactly these people – prefer simplification over complex relations. They want the world to be explained to them, to be constructed, rather than some analytic and deconstruction work creating more problems than results. Most people want simple solutions. Therefore, I suspect that users of quantified self tools have to experience simple (positive) results in order to stay motivated.

At the 2014 M-Days conference, Frank Kressmann of Braun GmbH, a Procter & Gamble subsidiary, presented the first interactive electric toothbrush. It communicates via Bluetooth with an app, shows how long a user has been brushing her teeth, and gives some recommendations on the optimal pressure on the toothbrush head. P&G had 8,000 users tested this toothbrush who really seemed enjoying their oral hygiene: they extended their average duration of brushing their teeth from 45 sec to 2 min and 16 sec, a 300% change. Obviously, there’s an enormous impact of making a toothbrush interactive – it results not just in a minor, but in a significant behavior change.

Which brings me to the title of this post: Could we learn all about behavior change by simply applying some makeup?: Imagine Whitney, dressing herself up for tonight’s party. Before Whitney will leave her house she puts on her make-up. She does that in front of her mirror. At some point, she decides that it’s enough and she’s satisfied with what she sees in the mirror. She is ready to go.

Here are the ingredients of that behavior:
– Goal: looking good for tonight’s party
– Means: the makeup
– Control and measuring module: the mirror
– Feedback loop: many small make-up actions and their results
– Benchmark: Whitney’s look before vs after makeup
– Result 1: looking good
– Result 2: compliments from her friends

With her first glance into the mirror, Whitney realizes that she wants to enhance her look. (Maybe she doesn’t but for my example I need her to do so.) By knowing the instrument for an action which will change her look for the better, using the instrument and experiencing immediate effects of her actions, Whitney learns that specific actions lead to required results.

Couldn’t we therefore simply add mirrors to people’s daily behavior in order to motivate them to change their behavior? It doesn’t have to be real mirrors; it could be a tool mimicking the function of a mirror, such as an app which asks her user things about her actual behavior. Or an app like the one connected with the toothbrush – which mirrors the cleaning of its user’s teeth. The user would then be reminded of her actual behavior and “see it” like she would see it in a mirror. Do you yourself use a mirror on a regular basis? Which kind of mirrors (in a metaphorical sense) could you imagine?

I’ll elaborate on behavior change in forthcoming posts. But for moment, I encourage you to put on some makeup (as our CEO Joerg in this post’s feature visual, by courtesy of Kira, photographed by Yuki) in front of your mirror and share the results with us!