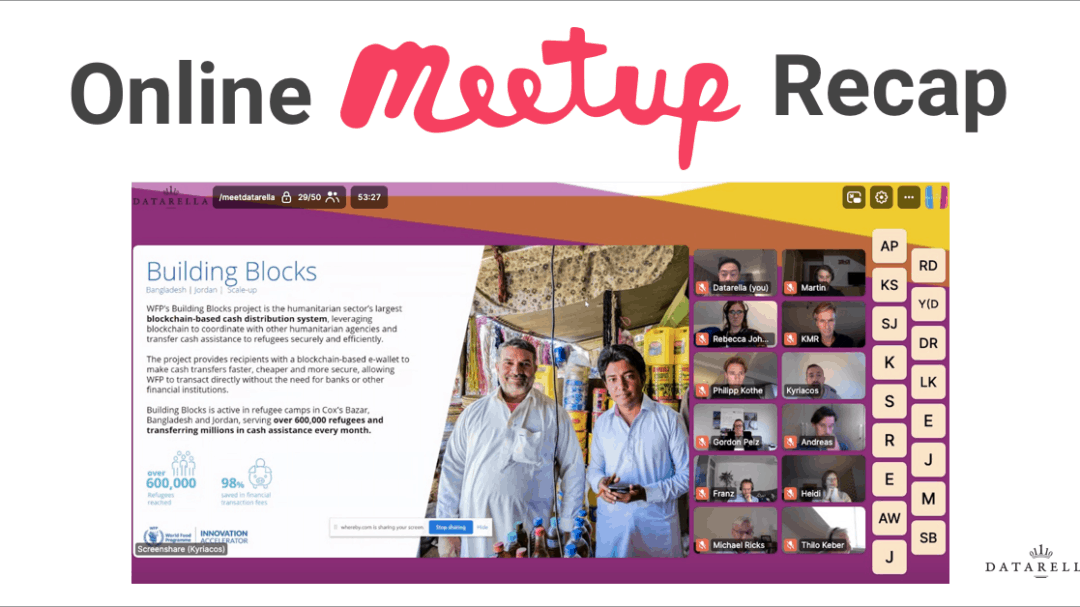 Not even COVID-19 can stop our meetups. However, since we did not want to risk the health of our audience, we decided to hold our 22nd Blockchain Munich Meetup online. No pizza, no beer, but insightful presentations of the application of blockchain technology in the aid industry.

First up was Kyriacos Koupparis, head of Frontier Innovations, WFP’s innovation accelerator. After we briefly celebrated that the World Food Program recently won the Nobel Peace Prize, Kyriacos gave us an overview of the various blockchain projects at his organization. Starting with our beloved Building Blocks project, which supports over 600k refugees in Jordan and Malaysia with cash vouchers for everyday purchases. Our blockchain-based system saved WFT millions of USD in foreign bank transfer costs. We at Datarella are very glad to help to maximize the value which arrives at the people in need. Next to using blockchain for finance, WFT sees the high potential in the application of blockchain technology to increase supply chain traceability. Here, we also completely agree with WFP. As demonstrated with our Track & Trust project, Blockchain Technology allows bringing clarity to complex supply chains by documenting each handover in the T&T Blockchain.

The next speaker was Franz von Weizsäcker, Head of Blockchain Lab at Deutsche Gesellschaft für Internationale Zusammenarbeit (GIZ). The GIZ is leveraging blockchain technology for real-world use cases. Franz presented a project in Georgia, in which the Bitcoin Blockchain is used to document hashes of land registry titles. Also, the GIZ is applying blockchain technology for supply chain solutions. On the one hand, to enable tracking the origin of organic spaces, on the other hand, for digital certification, which aims for trade facilitation at customs offices. Further, it was very interesting to learn about a community currency project the GIZ has started in Cameroon. The project was inspired by the work of the Grassroots Economics Foundation in Kenya, which uses complementary currencies to overcome the shortage of national currencies in poor communities.

Our last guest speaker this evening was Gordon Pelz, who is on the Board of Trustees of the YOU Stiftung. Gordon presented to two projects, in which the YOU Stiftung leverages blockchain technology, New Baraka and SmartAid. At the New Baraka project, a slum close to Dakar, the capital of Senegal, has been turned into attractive apartment buildings. The inhabitants of the prior slum moved into the new houses. Ownership of the living spaces will be transferred after a certain period to its new residences. Here, blockchain technology comes into play and is used to document symbolic rental payments of the previous slum inhabitants. Saving the data about the payees and payments into a blockchain serves as evidence at the time of transfer of ownership of the apartments. The second use case Gordon presented was SmartAid, our next generation donation platform the YOU Stiftung had launched together with Datarella. By today, the YOU Stiftung has collected over 1150 EUR via the SmartAid web app. The first steps of building a water well in Ghana are initiated. More details about the project status are going to be communicated soon via the project’s donation tracker. For more information on SmartAid and the water project please checkout SmartAid or our news blog news.smartaid.digital.

We were very happy to hear that blockchain technology is applied in so many real use cases in the aid industry, allowing for efficiency gains, where they are most needed. Let’s leverage the benefits of blockchain technology to make our world a better place for everyone.
We are looking forward to seeing you at our next meetup again.

← What Is A Digital Signature? Datarella Blockchain Bites #3
How to Upgrade an MVP to the Market-Ready Product Track & Trust with the support of BlockStart →